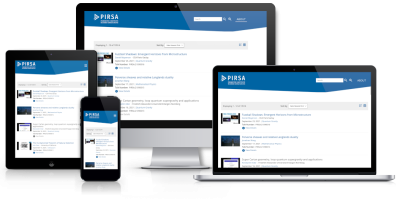 PIRSA is a searchable video archive of recorded lectures, seminars and conferences from Perimeter Institute (PI). Woolwich Web Works began collaborating with Perimeter Institute on design and development of PIRSA in 2019. Since then, we've worked with PI to continuously evolve and improve the platform by adding functionality and improving the design and user experience.

Also based on the Scitalk distribution is Scitalks - an archive of scientific talks from highly regarded institutions around the world.

Megan from Woolwich Web Works collaborated with PI's internal team to build the front-end displays and theme for the Scitalk Distribution, Scitalk, and PIRSA.